APPU: no more than 2-5% of smuggled pork enters the Ukrainian market

Smuggling of pork does not exceed 2-5% of the market capacity. This is reported by the Association of Pig Producers of Ukraine (ACS), citing the results of a survey of representatives of the meat processing industry. 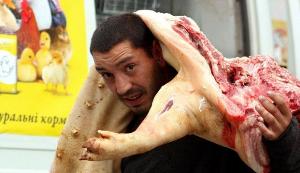 At the same time, the association notes that contraband volumes are constantly decreasing.

According to the results of the ACS survey, the growth of smuggling is hardly possible for several reasons:

Most of the representatives of the meat processing industry work either exclusively with domestic raw materials, or with raw materials that are imported by official importers.

Smuggled products can be a subject of interest exclusively for individuals and small local sausage producers in the border regions; smuggling of pork is insignificant and has decreased in recent years.

In addition to its own monitoring, the organization cooperates with the SFSU in order to combat the smuggling of meat. “It is not the fact of the existence of a supply of smuggled pork and pork by-products, but the spread of rumors and unconfirmed information about it, that causes more harm to market conditions,” commented in the ACS.

Information: 13 meat-processing enterprises of various scale of activity from different regions of the country and participants of industry associations joined the survey.