On a day filled with breaking trade news, World Meat Congress attendees heard from U.S. Agriculture Secretary Sonny Perdue and his counterparts from Canada and Argentina, along with leading experts in the areas of trade policy and economic analysis. The 22nd World Meat Congress is being held in Dallas May 31 and June 1, hosted by USMEF and the International Meat Secretariat. 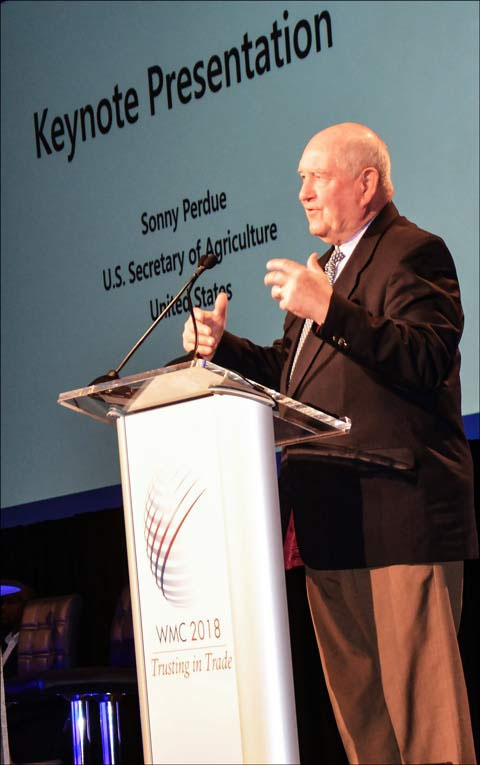 Perdue delivered Thursday’s keynote address, reminding the audience of the millions of consumers who benefit from agricultural innovation, advancement and trade.

“There are many businesses out there that you could be involved in, but just think about the noble cause of feeding people,” Perdue said. “Canada, the U.S., Mexico and other nations will compete, as we should, but hopefully we can do that in a wholesome and healthy fashion. Competition is good because it drives all of us to be better, and we want to be better for mankind.”

Canadian Minister of Agriculture and Agri-Food Lawrence MacAulay emphasized that the red meat industry is a critical economic engine for Canada and many other countries represented at the World Meat Congress.

“The red meat sector is vital to our economies,” he said. “In Canada the red meat industry is our largest food-manufacturing sector. It is one of the largest employers in the Canadian food industry, and it drives over $8 billion in agriculture and agri-food exports.” 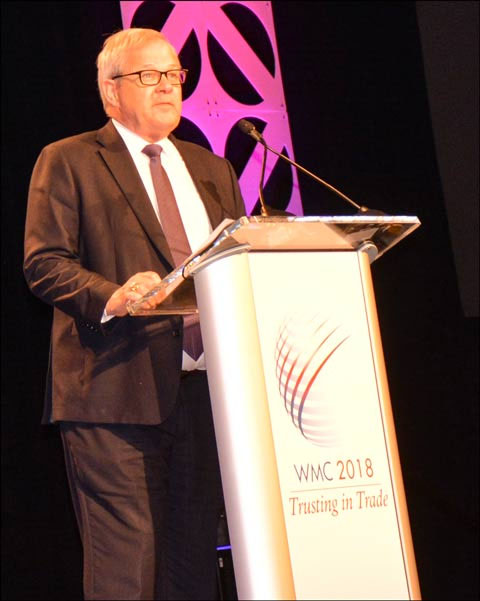 MacAulay explained that the industry faces a daunting task of meeting rapidly growing demand for red meat, while also protecting land, air and water resources and reducing its environmental footprint.

Argentine Minister of Agro-industry Luis Miguel Etchevehere noted that his nation knows all too well the negative impact protectionism imposes on agricultural producers, and reversing this damage is a priority for President Mauricio Macri, who was elected in 2015 on a pro-trade agenda. 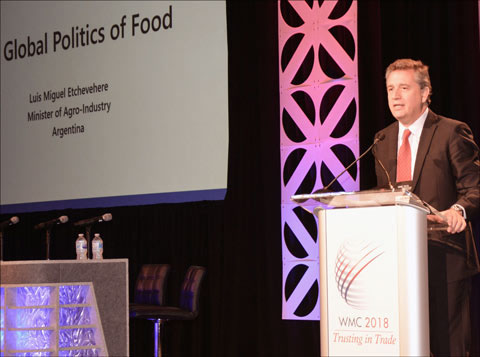 “I come from a country where a former government prohibited the exportation of beef because of a demagogic policy aimed at having very cheap beef for many years,” Etchevehere explained. “That produced a 12 million head reduction in our beef cattle stock, and it was a very big mistake. When President Macri arrived, he did the opposite. He opened the economy and we continue to work on opening markets, because we know that we must have access to enough markets for our industry to reach its full potential.”

When Perdue and MacAulay met with reporters following the World Meat Congress general session, NAFTA was naturally the lead topic.

“I just visited with Minister MacAulay and we both acknowledged that we have too much in common to allow trade disruptions to divide us,” Perdue said. “I’m hopeful that we can get back to the business of talking about how we can resolve this issue and do right and feed everyone. NAFTA has been generally good for agriculture in most aspects. But we need to make sure that we have equivalency in food safety, sanitary and phytosanitary issues, and then let our producers compete.”

“What we want to see happen is, I think, what most American farmers want,” said MacAulay. “I’ve had the opportunity to be in this country quite a number of times and I’ve never met anybody, practically, who’s not saying that NAFTA is vitally important to the agricultural sector. So representing agriculture in my country it would be pretty wise for me to make sure that I promote NAFTA and make sure that we come up with a deal that’s even better.”

Meeting with reporters covering the World Meat Congress, Smith emphasized that Mexico will not be rushed into revising NAFTA, despite concerns about Mexico’s upcoming presidential election and the mid-term U.S. elections this fall.

“We will negotiate as long as it takes, and we will not rush into closure if the substance is not there,” Smith said. “The substance must guide the negotiation, so regardless of the political process in Mexico or the (U.S.) elections in November, we will continue negotiating and we will close only when Mexican priorities have been addressed and we can come back to our country and say we have an upgraded NAFTA.”

While NAFTA promised to be a hot topic at the World Meat Congress, the discussion intensified after the Trump administration announced that beginning June 1, steel and aluminum imports from Canada, Mexico and the European Union will be subject to higher tariffs. Both Mexico and Canada announced their intention to impose countermeasures. A statement from USMEF President and CEO Dan Halstrom is available online. 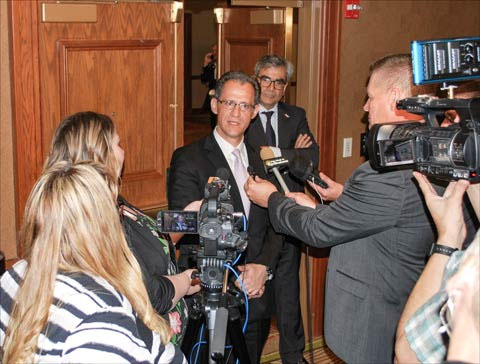 Kenneth Smith, chief NAFTA negotiator for the Mexican Ministry of Economy, was also a featured speaker at the World Meat Congress. Smith participated in a panel discussion on the future direction of the global trading system. The panel also included Ken Isley, administrator of the USDA Foreign Agricultural Service and Jesus Zorrilla, agriculture minister-counsellor at the European Union delegation to the United States. The panel was moderated by Darci Vetter, former chief agricultural negotiator for the Office of the U.S. Trade Representative. 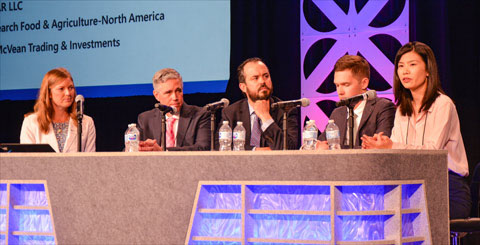 In the panel discussion, Vetter asked Zorrilla to explain how the EU’s entry into new trade agreements has advanced the competitiveness of its meat sector.

“Only two years ago, the trade priority of the European Union was a trade agreement with the U.S.,” Zorrilla explained. “But now we are in discussions with Indonesia and we have signed an agreement with Vietnam. In addition to Korea (where the EU has a free trade agreement in place) and Japan (an economic partnership agreement that has been reached but not yet ratified), we are also in discussions with the Philippines, so in that region we see great opportunity. Also in our agreements with more competitive meat-producing countries like Canada and Mexico, we will partially open our market and that will bring competition. It will increase cooperation and we will have very solid relations with those countries.” 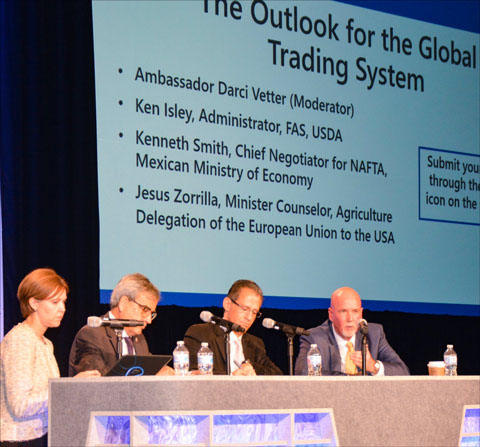 “It’s our belief that we need to apply sanitary and phytosanitary standards that are risk-based, that are scientifically based and that are uniformly applied,” he said. “Given those circumstances, we feel very confident that U.S. agriculture, our farmers and ranchers, can compete very favorably in the global marketplace with our abundance of products that are safe, nutritious and in demand throughout the world.”

Markets that pose definite challenges but also provide great opportunities for red meat exporters were the focus of the panel discussion titled, “A World of Change: Factors Affecting Red Meat Trade.” USMEF Economist Erin Borror served as moderator for the presentation, which opened with a broad look backward and forward at world meat production, consumer demand and trade. Timely topics such as obstacles in trade negotiations and the effects of potential trade wars were a big part of the discussion.

Experts from China, Mexico and Russia each offered insights into the factors that are expected to fuel the world’s red meat industry in the near future.

Amy Xu, general manager of the import division for China National Cereals, Oils and Foodstuffs Corporation (COFCO), Pablo Sherwell, head of RaboResearch Food and Agribusiness – North America, and Daniil Khotko, a leading industry analyst for IKAR, a company that monitors and forecasts Russia’s agricultural commodity markets, made up the panel.

They were joined by Michael Drury, chief economist for McVean Trading and Investments, who has extensively studied China and the effect its economic growth has on the rest of the world.

“The goal of the panel is to try to really hit on areas that are fast-changing and less understood,” said Borror. “It was an opportunity to bring experts from these markets and hear what’s happening on the ground – things that may not be readily accessible via data. It’s a chance to learn from inside the market as to what is driving economic growth and demand for red meat.”

Xu explained that China’s domestic pork production is rebounding. Pork import opportunities still exist, although questions remain as to the extent that future growth in pork consumption will create a need for more imports. The country’s growing demand for imported beef is expected to continue, Xu said, but she noted that Chinese consumers remain price-driven.

“Opportunities do exist for high-end beef cuts, because a segment of the population is able and willing to pay the price,” Xu said. “U.S. beef is on the high end of the price scale, but there is great interest in U.S. beef.”

Challenges faced in Russia include questions about the expansion of domestic pork production, whether the country’s limited pork exports will achieve a major growth cycle and what effect this might have on Russian consumers who are sensitive to pricing. Russia’s beef industry is already hampered by price issues.

Still, Russian livestock producers have an eye on the global market. In the foreseeable future, Khotko feels Russia is more likely to become a competitor than a customer of U.S. pork and beef.

Borror pointed out that Mexico’s domestic beef and pork sectors have attracted significant investment, but production growth may be offset by growing consumption, especially when it comes to pork.

“Mexican consumers have a much more positive view of pork than they did 20 years ago, and they are learning to eat pork in new ways,” said Sherwell. “Also, economic growth in Mexico has changed people’s diets. We’ve seen more protein put into their diets and consumption rates have climbed.”

Drury focused his remarks on three key factors: complacency, especially with regard to a coming recession; volatility; and the speed at which change occurs, particularly in China. He highlighted that we live in a global economy, largely fueled by multinational companies, and offered insights on how future political shifts could have implications for international trade. Drury also noted that he doesn’t see the Trump administration changing its approach to trade.

The World Meat Congress concludes Friday with panel discussions on the latest in red meat production technologies, the impact of consumer demands and societal norms on food production practices and preparing for tomorrow’s consumer.
Friday’s keynote speaker is best-selling author Jeff Fromm, whose books include Marketing to Millennials, Millennials with Kids and Marketing to Gen Z.