USDA: meat exports up for all major commodities in the first half of 2018

All major U.S. animal protein sources have experienced growth in exports in the first half of 2018 relative to the same period in 2017.

U.S. trade data for the first 6 months of 2018 indicate year-over-year (YOY) growth for U.S. exports of all major meats as well as dairy and eggs. 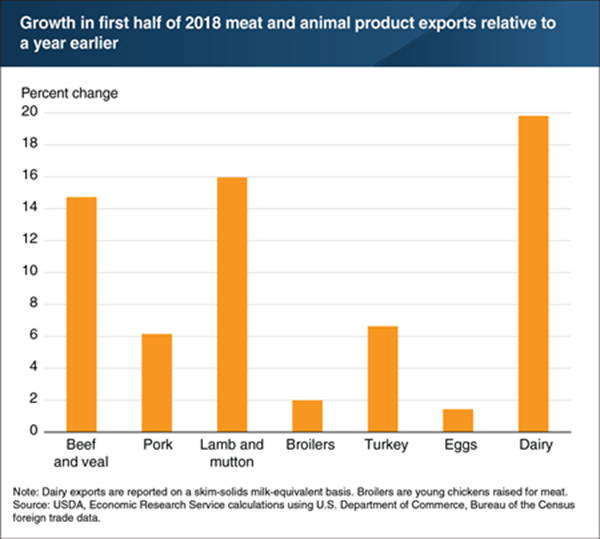 Lamb and mutton exports increased by 16 percent YOY, albeit from a much smaller base than other meats.

First-half 2018 pork exports —more than 6 percent above a year ago— were driven higher mainly by larger shipments to Mexico, South Korea, Central/South America, and the Caribbean.

On the poultry side, turkey meat exports grew at levels on par with pork, while broiler meat and egg exports grew by only 2 and 1 percent, respectively.

Although U.S. egg exports to certain major markets (such as Canada, Japan, and Hong Kong) demonstrated double-digit growth in the first half, declines in sales to other markets, including the European Union, confined total growth to 1 percent YOY.

This chart appears in the latest ERS Livestock, Dairy, and Poultry Outlook newsletter, released in August 2018.