According to estimates released by the United States Department of Agriculture (USDA) in the Livestock and Poultry: World Markets and Trade report, global pork production is projected to increase and exports to decline, both of which will be influenced by China. 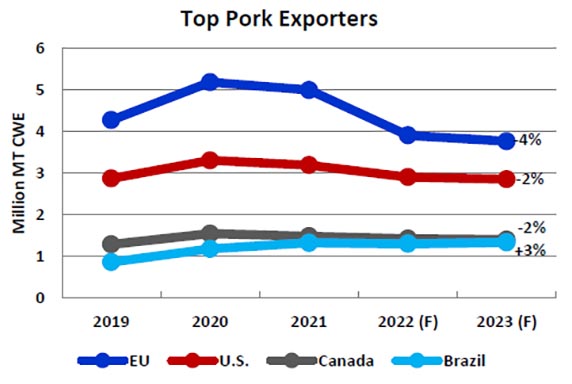 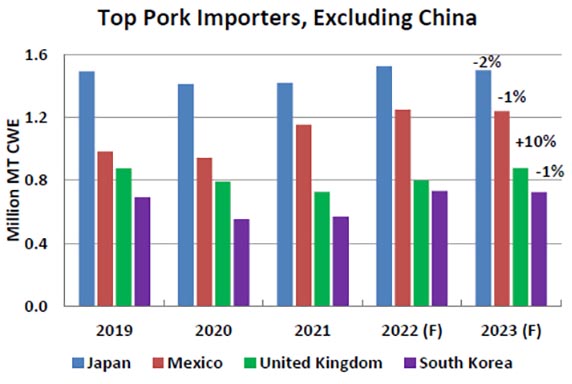 Global production is forecast to rise 1 percent in 2023 to 111.0 million tons as production in China increases. China pork production is expected to grow 2 percent as the sector continues to recover from the impacts of African swine fever (ASF). High feed costs in China are expected to reduce incentives to over-fatten hogs. The United States, Brazil, and Mexico are also forecast to expand production, more than offsetting declines by other major producers including the EU and the United Kingdom (UK). Rising feed, energy costs, and environmental restrictions will dampen EU production. Producers in the UK face high feed costs and weaker demand for domestic pork. Brazil and Mexico continue to expand their hog sectors to meet growing domestic demand, partly driven by consumers seeking alternatives to higher-priced beef, and stronger export demand in several key countries. Production in Vietnam continues to rebound as the management of ASF has protected the sector from large-scale outbreaks.

Global exports are forecast to fall 2 percent to 10.5 million tons in 2023 as China imports weaken for a second consecutive year. Despite persistent issues with ASF, Philippines pork imports are also forecast to decline due to the end of policies favoring imports in 2022; the temporary increase in pork quota volumes ended in May 2022 and reduced tariffs were extended through the end of 2022. UK pork imports rise as pre-pandemic consumption trends are expected to return, shifting purchases from retail to food service, shifting demand for domestically produced pork to imported pork.

U.S. production and exports: U.S. production is forecast 1 percent higher in 2023 to 12.4 million tons on gradually increasing pig crops and heavier weights. However, U.S. exports are forecast lower in 2023 on easing demand by key importers such as Mexico and China.