As foodservice rebounds in Japan, a new campaign promotes fried U.S. pork loin as an alternative to a fried product that gained popularity during the pandemic.

Demand for takeout and delivery reached new heights in Japan during the pandemic and the foodservice sector responded by developing new menu ideas for customers. Specialty shops featuring Karaage is an example and experienced explosive growth in 2020 and 2021 with sales reaching $950 million, up 50% from 2019. 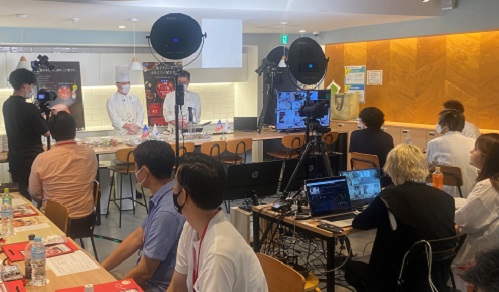 Karaage is a Japanese cooking technique in which various foods — most often chicken — are deep fried in oil.

USMEF sees U.S. pork loin as a viable alternative and has worked with leading chefs to develop fried pork recipes for the foodservice sector. Called Butakara (fried pork in Karaage style), nine new recipes have been developed for menu consideration.

“The fried pork loin project is one of several marketing initiatives for pork aimed at the foodservice sector this autumn,” says Satoshi Kato, USMEF marketing director. “We will begin full-scale promotion of this concept in September at trade shows, customized seminars and one-on-one meetings with restaurants.”

USMEF also sees potential for Butakara in the retail sector and will develop promotional programs with target account retailers. Videos are being developed for each of the nine recipes for social media promotion to build consumer awareness and interest in the concept and to pull demand through the foodservice and retail sectors. Funding support for the new initiative comes from the National Pork Board, USDA’s Market Access Program, Indiana Soybean Alliance and United Soybean Board.