Present and future of live pig trade in the EU

Live pig trade between countries in the European Union has been affected by the sanitary situation, logistical difficulties following the COVID-19 pandemic, and production being subjected to increased regulations and competitiveness.

In 2021, more than 31 million pigs were traded between EU states, a sharp decrease compared to 2017 (-10%). The spread of African swine fever in Belgium in 2018 and then in Germany in 2020, as well as logistical problems related to COVID-19, have complicated the international trade of live pigs. Historically, this trade has taken place in northern Europe, especially between bordering countries. 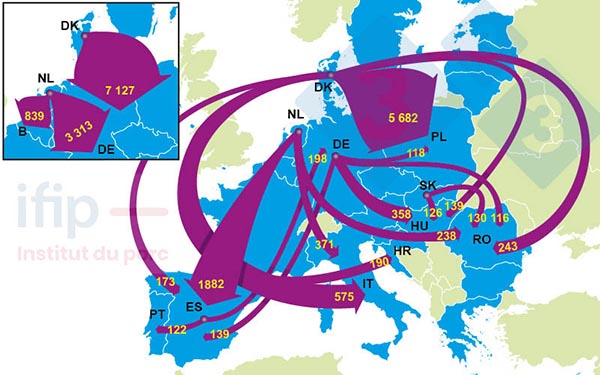 The Netherlands, Denmark, and Germany generate 82% of European flows. Transport over longer distances is still possible, although European regulations make it difficult. Slaughter pigs are exported for better remuneration to regulate domestic supply according to demand. The export of piglets, linked to specialized production, responds to environmental constraints that limit on-site finishing.

The two main exporters of live pigs, the Netherlands and Denmark, export more than 23 million pigs to other member states each year.

In the Netherlands, exports fell 17.4% between 2020 and 2021 due to the sharp drop in production in the country. Exports to Germany, the Netherlands' top destination, fell, both in piglets and slaughter pigs which were halved to less than 650,000 head, barely reaching a quarter of the 2017 exports. This plunge is also explained by the decline in the pork price in Germany following the outbreak of ASF.

For Denmark, the main destinations are Germany and Poland. Danish piglet exports to Poland have been falling since 2018, a trend that has escalated in 2021 (-12% in 21/20). This decline is explained by the spread of ASF in Poland and the low profitability of finishing. Danish piglet flows to Germany have stayed steady, but the preference for domestic origin in Germany could penalize them.

In 2021, Spain imported 2.5 million piglets, including 1.9 million from the Netherlands, which supported recent domestic growth and compensated for the loss of piglets on farms affected by PRRS virus. To meet increased domestic slaughter capacities, Spain imports more than 600,000 slaughter pigs per year.

In the coming years, intra-EU trade of live animals is expected to continue to decline, due in part to decreases in Dutch and Danish production and lower German demand.