USMEF offered importers in Colombia and Chile educational seminars on the advantages of U.S. pork for further processing and updates on U.S. pork production and supplies. Funded by the Pork Checkoff, the seminars targeted the two markets that import a majority of the U.S. pork sold to South America.

Alimentos Carnicos in Colombia and Cial Alimentos in Chile were the two processing companies selected for the educational sessions. 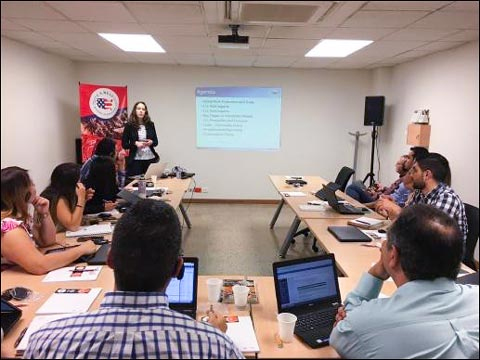 “The main destination for U.S. pork in both countries is the further processing sector, and these companies complement domestic supplies of raw materials with imported product,” explained Jessica Julca, USMEF representative in South America. “Our aim in these seminars was to strengthen our relationship with these companies with the ultimate goal of U.S. pork becoming the leading supplier. We offered each of them support in finding reliable suppliers of high-quality pork products and in identifying new opportunities for alternative cuts and value-added products.”

Alimentos Carnicos is the largest pork importer in Colombia and the country’s largest purchaser of U.S. pork. It operates eight processing plants in Colombia and one in Panama. The company also has a private label program with Freshmark Sugardale and imports U.S. bacon for its Zenu brand.

USMEF organized a session with the company’s purchasing team in Medellin, Colombia, where USMEF Trade Analyst Jessica Spreitzer provided an update on the U.S. pork industry and price trends for cuts of interest.

“Alimentos Carnicos requested a market update presentation on a variety of topics, including global pork production and trade, U.S. pork imports and exports, U.S. pork production, competitors in Colombia, and U.S. pork consumption trends and seasonality,” said Spreitzer. “It was an opportunity to emphasize the growth and stability of the U.S. pork industry and reaffirm the importance of the Colombian market for U.S. pork exports.” 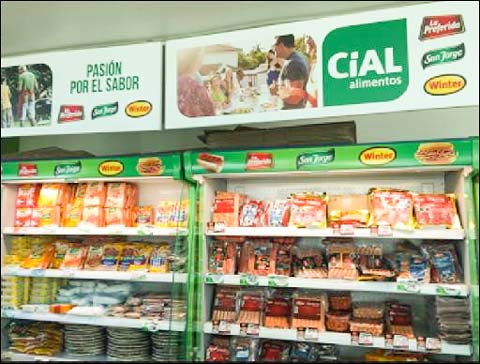 Spreitzer noted that Colombia’s per capita pork consumption has increased by an average of 11 percent each year over the past 10 years. U.S. pork exports to Colombia were record-large in 2017, she said, adding that the U.S. accounted for an estimated 20 percent of Colombia’s pork consumption, up from 14 percent in 2015 and 2016.

In Chile, Cial Alimentos is the largest U.S. pork importer. It has two processing plants in Santiago and a nationwide distribution network. The company has a history of working with USMEF, having participated in a USMEF Global Processing Seminar at the University of Wisconsin in 2015.

“The company’s purchasing manager, Jaime Saavedra, found the content at the Wisconsin seminar very valuable and wanted to have a similar activity for key staff at the company’s Chile office,” said Julca. “USMEF worked with him to develop a program to highlight why and how raw material impacts the final product’s quality, yield and revenue. We thought Dr. Osburn would be the perfect choice to share information in that market, and he was. The feedback was very good.”

As a bonus, Cial Alimentos indicated during the seminar that it is interested in importing U.S. chilled pork in the future, Julca said.