U.S. beef and pork cuts were grilled and served to fans of American football in two of Mexico’s major urban centers on Super Bowl Sunday. Funded by the National Pork Board and the Beef Checkoff Program, USMEF’s second annual Super Bowl parties and grilling workshops were the result of a partnership with restaurants in Aguascalientes and Mexico City. A brief video of the USMEF Super Bowl event in Aguascalientes can be seen here. 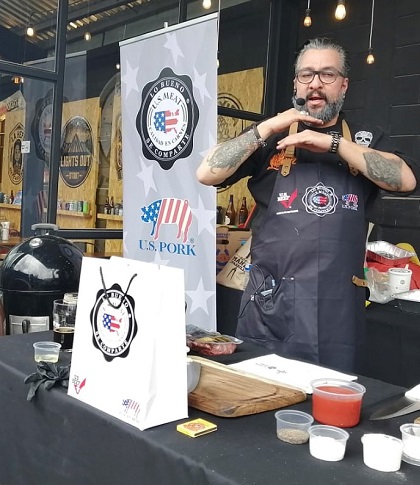 “We tried this activity for the first time during the 2019 Super Bowl after taking note of the NFL’s growing popularity in Mexico,” explained Lorenzo Elizalde, USMEF trade manager. 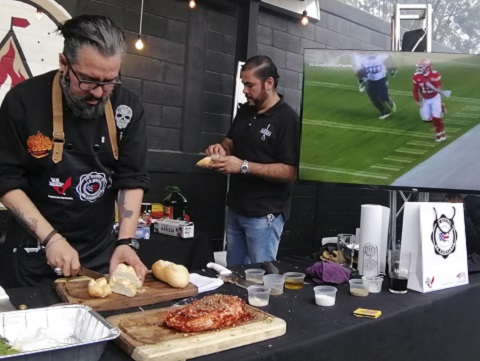 U.S. beef and pork cuts are prepared for grilling at a workshop held during the Super Bowl pregame show

“Each year, more and more American football fans in Mexico are gathering in a central location to watch their favorite teams and big games like the Super Bowl – just like fans in the United States. We saw it as a great opportunity to introduce U.S. beef and pork dishes that go well with these kinds of gatherings, and really received a lot of positive feedback from consumers and from our commercial partners that participated.”

In Aguascalientes, USMEF’s second annual “Tailgate Super Bowl Grilling Workshop” was organized by Los Manes de la Parrilla (“The Grill Men,” a group of barbecue enthusiasts) at the Campfire Brewing Garden restaurant. The workshop began two hours before kickoff and continued until the final whistle. Along with some of USMEF’s commercial partners in the region, 35 consumers took part. They were shown how to grill U.S. beef and pork as they enjoyed the game on large-screen TVs set up for the event. 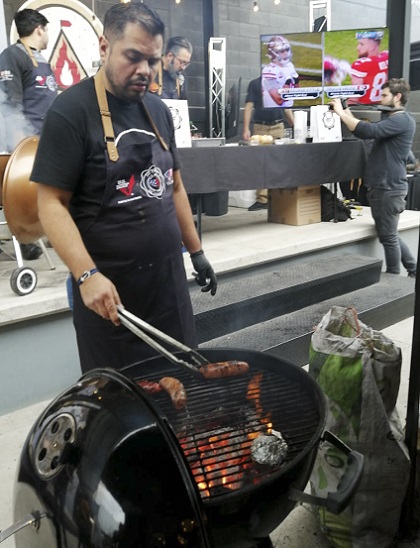 Cuts used in the workshop were U.S. beef ribeye and short ribs, as well as U.S. pork belly and sausages. Chef Pedro Martinez, owner of Hell’s Kitchen restaurant in Aguascalientes, taught participants how to prepare several dishes made with these cuts.

In Mexico City, USMEF partnered with Jaso Restaurant to host a Super Bowl party where a special menu made up of U.S. beef and pork barbecue items and sausages was served. More than 60 brand managers, foodservice directors and social media influencers attended the event.

Guests posted pictures and stories on Facebook and Instagram praising the flavor and quality of U.S. red meat.