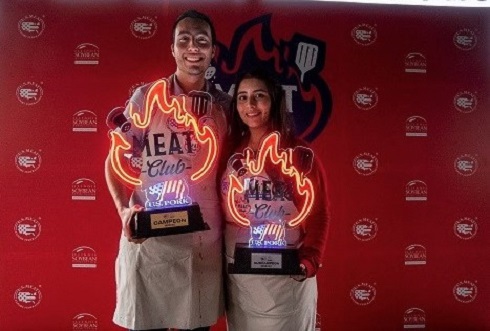 The top two finishers in the U.S. Pork Club Challenge competed with original recipes for pork loins, back ribs and pork belly

“We rolled the campaign out as a kitchen contest with six influencers from Mexico City, Monterrey, Guadalajara, and Saltillo to promote three specific U.S. pork cuts with easy recipes,” says Leticia Flores, USMEF communications specialist. “The contest was carried out in three phases over six weeks and transmitted live on Facebook.”

To keep the recipes simple, contestants worked with a limited list of ingredients. Phase one of the contest featured original recipes with U.S. pork loin, a cut that USMEF is strategically promoting to the trade and consumers in Mexico.

The four remaining contestants then competed with recipes for back ribs with the top two contestants moving on to the third and final phase of the contest, which involved original recipes using pork belly. Twelve new recipes were created during the contest and will be incorporated into a new recipe book later this year.

Build interest in the contest, the six influencers had published several posts, stories and videos rehearsing their recipes, promoting the contest and demonstrating the product quality attributes of U.S. pork. Eighteen content subjects were generated on Instagram and TikTok and the six-week campaign reached 33.4 million. Funding support for the campaign was provided by Illinois Soybean Association.