Recognizing that only a few yakiniku and hot pot restaurants in Hangzhou, China, are using U.S. red meat, USMEF teamed with the Zhejiang Catering Industry Association to organize a U.S. red meat culinary application seminar for the area’s hotel, restaurant and institutional (HRI) sector. The seminar was funded by the National Pork Board and the Beef Checkoff Program. 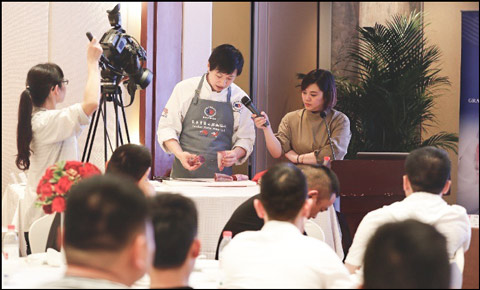 A U.S. red meat culinary application seminar was held in Hangzhou to help create awareness of U.S. pork and beef in the city’s HRI sector

USMEF invited catering managers, chefs and food buyers to the event, which was held at the Landison Hotel in Hangzhou. Several packers and distributors were also invited to the seminar, where they presented samples in order to help familiarize prospective customers with their products.

“We’ve been able to make more people in China aware of U.S. red meat through USMEF promotions in the first-tier cities like Beijing, Shanghai, Guangzhou and Shenzhen, but it is absolutely essential to increase U.S. meat consumption in some of China’s other rapidly growing cities, especially those in eastern China’s Zhejiang and Jiangsu provinces where high-end hotels and fine-dining restaurants are continuously opening,” said Ming Liang, USMEF marketing director in China. “When USMEF organized this seminar, the goal was to educate young chefs in this part of the country and help them develop new recipes using U.S. pork and beef.” 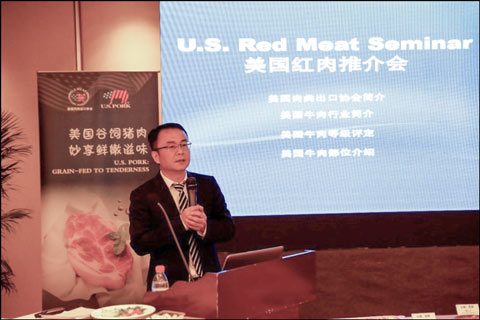 USMEF encouraged restaurants in the rapidly growing Zhejiang and Jiangsu provinces to increase sales of U.S. pork and beef

Hangzhou, the provincial capital of Zhejiang province, is considered one of 15 new first-tier cities in China.

“It has a mature consumption environment, large market opportunities and a growing economy,” Liang said. “But up this point, Hangzhou’s offerings of U.S. meat have lagged behind similar cities in China, even in the high-end hotels. One exception is that the Ningbo Hyatt is now using U.S. beef.” 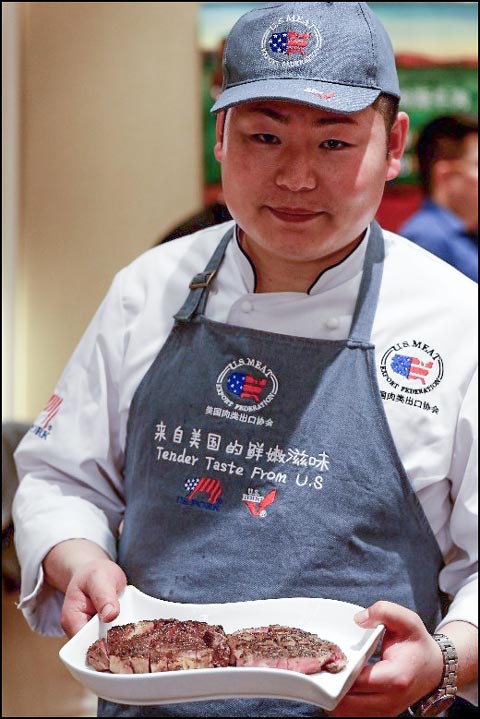 U.S. pork and beef were prepared, cooked and served to chefs from popular hot pot and yakiniku restaurants

During the seminar, USMEF shared information on U.S. pork and beef production and detailed the cuts that fit well with various types of cuisine. A cutting demonstration followed, focusing on U.S. beef secondary cuts such as rib fingers, top blade, heel muscle and tri-tip. The demonstrations showed how these cuts, along with top sirloin and pork CT butt can be utilized in hot pot and yakiniku dishes.

Hot pot has been the most popular cuisine in China for several years, Liang noted, but Japanese and Korean-style food is also popular with young people in China. To help educate chefs on handling and cooking these dishes with U.S. pork and beef, USMEF used the Hangzhou seminar to teach proper defrosting methods and showed them new ways of plating and presenting high-quality meat to consumers.

“We realize that you have to teach chefs and foodservice managers how to create new meat dishes using new cuts,” Liang said. “But it’s been difficult for them to create or develop recipes due to a lack of experience cooking U.S. meat. That was an aim of the seminar, to improve awareness of U.S. meat and to inspire the development of new recipes.” “Some of the cuts we promoted offer tremendous value, but few people know about them,” Liang said. “For example, at the seminar we showed chefs how beef shoulder clod can very quickly be cooked to perfect tenderness. And Berkshire pork is seldom sold in traditional restaurants, so we tried hot pot with Berkshire single-rib belly. We also had a tasting featuring pan-fried beef and roasted pork CT butt with teriyaki sauce. Each of these dishes really opened some eyes among HRI professionals.