The southern regions of Moldova were affected by African swine fever (ASF), which is not transmitted to humans, but cattle literally mowing. In the Kagul region of the republic, 93 cases of infection with the virus were confirmed.

This happened in one of the farms in the village of Roshu, where the employees of the National Food Safety Agency went to destroy all the infected livestock. 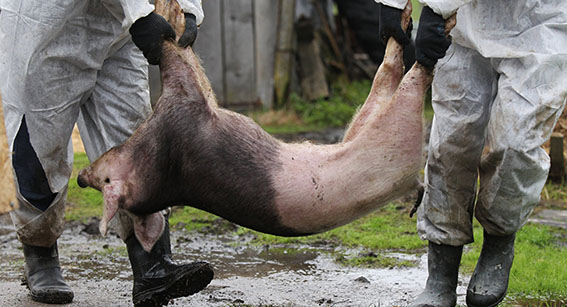 Disinfection of all premises on the farm was also carried out, and dead animals were buried in a special repository to prevent the spread of infection.

Last week, a case of ASF infection was also detected in the village of Milesti, Nisporeni district of Moldova.

The virus is characterized by fever, skin cyanosis and extensive bleeding in the internal organs. Viral disease belongs to list A according to the International Classification of Infectious Animal Diseases. For humans, African swine fever is not dangerous. In lightning fast animals die without any signs.

In the acute phase of infection, livestock have shortness of breath, coughing, attacks of vomiting, paresis and paralysis of the hind legs. Serous or mucopurulent discharge from the nose and eyes is observed.

On the skin in the region of the inner thighs, on the abdomen, neck, at the base of the ears, red-violet spots are noticeable, when pressed, they do not fade.

Pustules may appear in some areas of the skin where scabs and ulcers form. The death rate of livestock from the virus is up to 100 percent, there is no effective treatment against African plague.

Since the end of 2016, outbreaks of ASF have been constantly recorded in Moldova. As a result, from October 2016, the export of pork from the country has been banned. As the experts of the National Food Safety Agency explained earlier, according to international practice, only after 12 months, if outbreaks of the disease are not recorded in the country, one can claim the resumption of exports.

In addition, from October 25, 2016, a ban on the import of pork meat and meat products into Moldova continues.